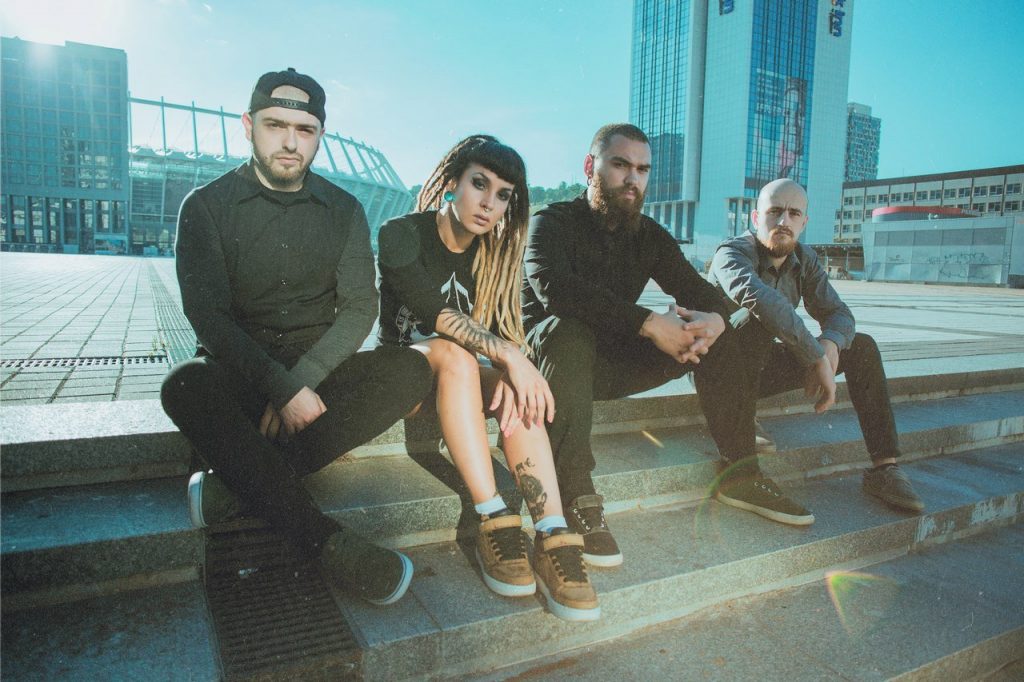 It was not a pleasant night in Brooklyn.

Multiple days of steady rain covered the streets with sewer grime, arousing the common stench of urine that can smack you in the face with the subtlety of a brick. Along the outer wall of The Kingsland concert venue, roughly a hundred rabid fans of the Ukrainian metal band, Jinjer, accepted the warm drizzle with all the enthusiasm of an unwitting golden shower participant on a hot summer day. So, while it might not have been a pleasant night, I knew it was going to be a good one.

According to Kostyuk, the band’s music has definitely been influenced by its environment, which was not particularly conducive to the creation of bubble-gum pop, rainbows and unicorns.

An interesting anecdote, to be sure. But the fact is, Eugene and his band mates essentially grew up during the fall of the Soviet Union. They felt the brunt of a collapsing economy, and a political and social uncertainty that still exists today.

To be honest, I felt somewhat stupid asking Eugene if his surroundings had any affect on the band’s music. How could it not? And perhaps this is one of the reasons Jinjer’s music expresses a powerful urgency. While I don’t buy this idea that an artist must struggle to achieve brilliance, it would be foolish to deny that struggle can, and does, influence one’s art.

Certainly this is the case with the song “When Two Empires Collide,” which is a very clear reaction to the violence that has been forced upon Ukraine by foreign aggressors.

To every metal and hardcore band out there that parades chipped shoulders and hostility towards “the man,” you’ll never be as hard as four musicians that likely rehearsed over a backdrop of foreign invasions and commercial airliners falling from the sky as victims of military actions.

That’s the reality of Ukraine, so I must admit I felt a bit silly asking about the “cannabis scene” in Ukraine. However, if one believes that cannabis prohibition is a human rights violation, certainly this question has relevance.

From what I’ve read, Ukraine seems to be the kind of place where you can’t get good weed unless you know someone. And if you’re a foreigner, be ready for a healthy shakedown from the cops if you get caught. As it turns out, it’s a bit more involved than that.

After speaking with Eugene, I learned that it’s not just foreigners that get hustled by law enforcement, but Ukrainian citizens, too. That being said, I also got the impression that a younger generation of Ukrainians are far more in favor of legalization than an older, more conservative generation that still seems to call the shots.

The band members don’t seem to get too giddy over weed, except for guitarist Roman Ibramkhalilov, who was apparently quite taken with some of our dispensaries in the states that have legalized the adult use of cannabis.

Given the potential risks that come with consuming cannabis in Ukraine, I suspect that despite their support of legalization, the good folks in Jinjer aren’t likely to get you stoned at a show in Kiev. Still, that doesn’t mean some headway isn’t being made. In fact, last year, a Ukrainian mayor suggested Ukraine become Europe’s first center for hemp therapy.

Michel Tereshchenko, the mayor of the city of Hlukhiv, is eager to return to a hemp industry that was actually quite vibrant in the early 1900s, when the hemp breeding department at the Institute of Bast Crops in Hlukhiv was fully operational. At the time, this was one of the world’s biggest centers for developing new varieties of hemp. Today, Tereshchenko wants to breathe new life into something that could actually prosper in Ukraine.

And while there have also been a handful of small protest rallies supporting the decriminalization of cannabis in Ukraine, if you want to head out to the Black Sea beaches of Koktebel and smoke a little weed, it might still be more hassle than it’s currently worth. So if you’re fortunate enough to catch Jinjer in the US, I would recommend not being stingy with your weed, and offer these good people a taste of your finest flower. They deserve it.

In the meantime, if you dig heavy music, and you have any any electrical currents circulating through your cranium, check out Jinjer. There are few metal bands bringing this kind of intense aggression and integrity to the scene. The musicianship is top notch, and with sultry, badass vocalist Tatiana Shmailyuk, Jinjer could end up being the biggest thing to come out of Ukraine since Milk Kunis and borsch. While both are wonderful exports, they have nothing on the intensity of Jinjer.