When nothing is off limits, you can reach your full potential.

Toothgrinder realized this fact while making their 2017 full-length, Phantom Amour [Spinefarm Records]. While retaining the slippery schizophrenic spirit that turned them into a critical favorite on 2015’s Nocturnal Masquerade, the New Jersey quintet—Justin Matthews [vocals], Jason Goss [guitar], Matt Arensdorf [bass, vocals], Wills Weller [drums], and Johnuel Hasney [guitar]—dramatically augmented their unpredictable creative palette through expanding the grasp on melody, incorporating cinematic electronic flourishes, and even going acoustic, to name a few evolutions. As hypnotic as they are heavy, these thirteen tracks signify “progress” through and through.

“Everybody calls us ‘a progressive metal band,’ but I think the most progressive thing you can do is surprise your audience and keep yourself happy,” says Wills. “I feel like that’s exactly what we’re doing here. From jazz and classic rock to metal and experimental, everybody brings different flavors to the table. Then, we pour them into the same pot. That’s Toothgrinder in a nutshell.”

It’s also why the band quietly made a palpable impact with Nocturnal Masquerade. As Revolver dubbed them “A Band to Watch,” it earned acclaim from AXS, Metalsucks, New Noise, Metal Hammer, The Aquarian, and more as the single “Diamonds for Gold” [feat. Spencer Sotelo of Periphery] generated over 300K YouTube/VEVO views and “Blue” cracked 384K Spotify streams. 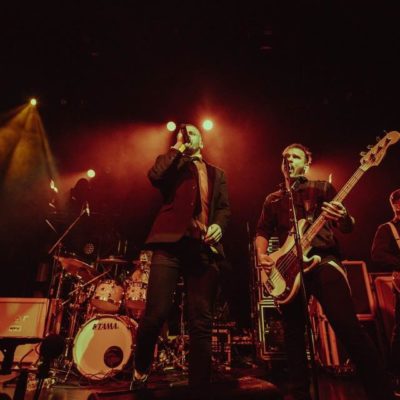