Coming out of Southern California during the rap-metal explosion around the turn of the century, Atreyu crafted a sound much closer to Agnostic Front or Hatebreed. Their warped, detuned guitars were matched by pounding drums and acidic vocals, which gave the material a distinct metalcore edge. Originally operating under the moniker Retribution, the band eventually changed their name to Atreyu, after a character from the Michael Ende-penned fantasy book The Neverending Story, and released their debut album, Suicide Notes and Butterfly Kisses, in 2002 via Victory Records. They continued to refine their punitive, but melodic post-hardcore sound on career best offerings like Lead Sails Paper Anchor (2007) and Congregation of the Damned (2009), before going on hiatus in 2011. They reconvened four years later and released their sixth studio effort, Long Live, with In Our Wake following in 2018.

The quintet was formed in Orange County by Brandon Saller (drums/vocals), Dan Jacobs (guitar), Chris Thomson (bass), Travis Miguel (guitar), and Alex Varkatzas (vocals). Atreyu released various demos, including the seven-song EP Visions, in the late ’90s before commercially debuting with the Fractures in the Facade of Your Porcelain Beauty EP on Tribunal in late 2001; the full-length Suicide Notes and Butterfly Kisses appeared the next year on Victory. Touring almost nonstop in support of the record, the group faced lineup changes as bassist Marc McKnight replaced Thomson before the recording of their follow-up. Atreyu’s second full-length, The Curse, surfaced in June 2004 and went on to sell over 300,000 copies; it was re-released with an accompanying DVD a year later. The band hit the road hard, playing 2004’s Ozzfest and 2005’s Warped Tour, in addition to headlining their own successful world tour. They contributed a track to 2006’s soundtrack to Underworld: Evolution and were near the top of the billing for the year’s Taste of Chaos tour, alongside the Deftones and Thrice. Their next effort, A Death Grip on Yesterday, was issued in late March 2006 and hit number nine on the Billboard charts. Following a summer spent headlining the second stage at the year’s Ozzfest, Atreyu jumped into the major-label waters over at Hollywood Records, leaving an early-2007 best-of collection as their Victory farewell. Their Hollywood debut, Lead Sails Paper Anchor, followed later in the year. In 2008 the album was re-released with bonus materials, including a concert film. Atreyu didn’t waste any time, and in late 2009 they released their fifth studio album, the critically acclaimed Congregation of the Damned. The album would be their last for some time, as the band went on hiatus the following year to focus on family matters and various other musical pursuits. They reconvened in 2015 with the Destroy/Spinefarm Records-issued Long Live, which featured 12 new hard-hitting tracks, including the blistering title cut and first single. In September 2018, the band issued a trio of singles ahead of the release of their eighth studio long player, In Our Wake, which arrived later that October. 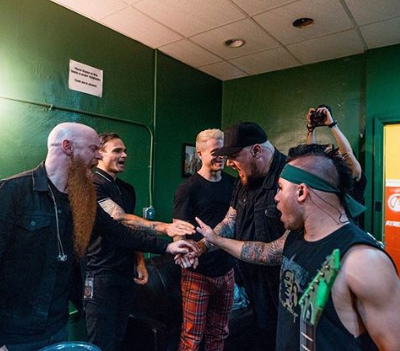