Alice in Chains both epitomized the solemn, heavy Seattle sound of the 1990s and stood apart from the grunge hordes. What separated Alice in Chains from their alt-rock brethren was how their roots lay in heavy metal, not punk. Guitarist Jerry Cantrell and vocalist Layne Staley both played in metal bands prior to the formation of Alice in Chains in 1987 and they released the band’s debut, Facelift, in 1990, well before Nirvana’s Nevermind pushed the underground into the mainstream. Despite their connections to metal, Alice in Chains thrived in the glory days of grunge, and it wasn’t merely a question of timing, either. The band’s sensibility fit into the alternative rock zeitgeist of the early ’90s. Cantrell’s gloomy, minor-key riffs were an ideal match for Staley’s tortured lyrics, creating a sound that felt as heavy as their Seattle cohorts but also was slightly slicker and ready for radio. It was versatile, too. After the group scored rock radio and MTV hits with “Man in the Box” and “Would?” in the early days of grunge, Alice in Chains became one of the first alt-rock bands of the ’90s to delve into acoustic-based music, scoring hits with the comparatively softer “No Excuses” and “I Stay Away.” Despite its success, the band was plagued with internal tensions during its commercial peak, much of it stemming from Staley’s drug addictions. His abuse slowed the band’s upward trajectory in the back half of the ’90s, a descent culminating in the singer’s accidental death in 2002. Four years later, Cantrell, drummer Sean Kinney, and bassist Mike Inez revived Alice in Chains with singer William DuVall, sparking an extended second life of recording and touring that has lasted longer than their original incarnation.

The roots of Alice in Chains lay in Sleze, a Seattle-based hair metal band that featured Layne Staley as lead singer. Sleze switched their name to Alice N Chains in 1986, roughly a year prior to Staley’s introduction to Cantrell at a party at the rehearsal space called the Music Bank. The pair became friends and Staley invited Cantrell to crash with him at his rented unit at the Music Bank. Shortly afterward, Alice N Chains broke up, as did Cantrell’s band, Diamond Lie. Cantrell began auditioning players for a new band, recruiting drummer Sean Kinney and bassist Mike Starr, but he still needed a vocalist and held out hope for Staley to join. At the time, Staley was singing in a funk band that also happened to need a guitarist, so Cantrell agreed to play on the condition his friend would join the fledgling group. Staley agreed. Not long afterward, the funk band folded and this quartet gelled under the name Alice in Chains.

Alice in Chains started to gig regularly in the Seattle area, often sharing bills with Mother Love Bone, earning the attention of promoter Randy Hauser, who bankrolled a demo. Dubbed The Treehouse Tapes, the demo earned the attention of Soundgarden managers Kelly Curtis and Susan Silver, who passed it along to Columbia. The label signed Alice in Chains in 1989 and made them a priority, ushering the band into the studio with producer David Jerden, who had recently worked with Jane’s Addiction. Early in 1990, the label released the promo-only We Die Young EP with their eye on heavy metal audiences and its title track became a hit on rock radio, setting the stage for the August release of the group’s debut, Facelift, which was quickly followed by a tour opening for Iggy Pop. “Man in the Box” became the album’s second single in January 1991, and once its video entered heavy MTV rotation, Facelift took off. The album entered the Billboard charts in April 1991, Van Halen requested Alice in Chains as a tour opener in August, and in September the album earned its first gold certification; it would later earn two platinum certifications.

As Facelift’s momentum grew, Alice in Chains kept busy behind the scenes, working on material for a second album and recording an acoustic EP called Sap. One of the first all-acoustic records from an alternative rock band, Sap was released in February 1992. Alice in Chains also filmed a cameo in Singles, Cameron Crowe’s romantic comedy celebrating Seattle’s vibrant underground scene of the early ’90s. By the time the film’s soundtrack appeared in June 1992, the Seattle scene had exploded nationally thanks to the unexpected success of Nirvana’s second album, Nevermind, and Alice in Chains were in the thick of it.

“Would?,” a menacing grind that doubled as the first single from both the Singles soundtrack and Alice in Chains’ second album, Dirt, started its climb up Billboard’s mainstream rock chart in June 1992, the same month the Singles soundtrack was released. By the point Dirt appeared in stores in September, Alice in Chains had firmly laid stakes in the grunge camp: “Them Bones,” the second single pulled from Dirt, became their first song to chart on Billboard’s alternative rock chart. Arriving at the peak of 1992’s grunge explosion, the dark and gloomy Dirt made Alice in Chains’ career. By December, the album earned a platinum certification — it would go platinum once again in 1993 and 1995, with a fourth and final certification arriving in 2000 — and it stayed on the charts thanks to “Angry Chair” and the Top Ten mainstream rock hits “Rooster” and “Down in a Hole.”

Despite their success, Alice in Chains were in turmoil behind the scenes. Mike Starr left the band in January 1993, to be replaced by Mike Inez. The band’s initial story was that Starr wasn’t ready to gear up for an intense work schedule, but Starr later said he was fired due to drug addiction. The specter of heavy drugs hung over the band, thanks to lyrical allusions on Dirt and rumors alleging that Staley was addicted to heroin. Alice in Chains soldiered forth, releasing two new songs on the soundtrack for the Arnold Schwarzenegger film Last Action Hero (including the radio hit “What the Hell Have I”) and playing a plum spot on the third Lollapalooza tour in 1993. Jar of Flies found the band retreating to softer, moody music, and the shift paid off commercially. Upon its January 1994 release, it became the first EP to debut at number one on the Billboard charts and, thanks in part to “No Excuses” — which went to number one on the mainstream rock chart and three on Billboard’s alternative chart, the highest placing they’d have with Layne Staley in the lineup — it was certified platinum by March; it would eventually earn two additional certifications.

Alice in Chains remained on the top of the charts, but they also remained off the road during 1994, fueling speculation that Staley was mired in heroin addiction. The rumors were true. Behind the scenes, Staley went through a bout of rehab that didn’t stick, leading the band to cancel its summer tour on a day’s notice and enter an unofficial hiatus. During this time, “Got Me Wrong” — a song initially released on Sap — was pulled as a single from the Clerks soundtrack and wound up as a radio hit. The bigger news during the hiatus was Staley’s busman’s holiday, Mad Season. Originally the Gacy Bunch at their initial concerts, Mad Season was a Seattle supergroup also featuring Pearl Jam’s Mike McCready, the Screaming Trees’ Barrett Martin, and John Saunders. The band’s lone album, Above, arrived in March 1995.

As Above was in the middle of its run on the charts — it peaked at 24 on Billboard’s album chart, with “River of Deceit” reaching the Top Ten on Billboard’s mainstream and modern rock charts — Alice in Chains reconvened to record their third album with producer Toby Wright. Upon its November 1995 release, the eponymous record debuted at number one on Billboard, with the singles “Grind” and “Heaven Beside You” reaching the mainstream rock Top Ten; the latter peaked at six on the alternative rock chart. Once again, Alice in Chains were loath to tour. Instead, they recorded a concert — their first in nearly three years — for MTV Unplugged on April 10, 1996. By the time the show was released as an album on July 30, Alice in Chains’ return to the stage was already thwarted: after four supporting dates for Kiss, Staley was found unresponsive after a heroin overdose on July 3, 1996 following a show in Kansas City, Missouri.

Staley recovered from his OD but the band struggled as he battled his addiction. Following the death of his former fiancée, Demri Parrott, in October 1996, Staley secluded himself from the public, leading Jerry Cantrell to write and record a solo album called Boggy Depot; Mike Inez and Sean Kinney both appeared on Cantrell’s solo effort. Alice in Chains completed two new songs, including the Top Ten mainstream rock hit “Get Born Again,” for the 1998 box set Music Bank. The box was the first of a series of archival releases in the next three years: Nothing Safe: The Best of the Box showed up in 1999, followed by the concert compilation Live in 2000 and Greatest Hits in 2001. All the members of Alice in Chains busied themselves during this extended hiatus. Sean Kinney and Mike Inez appeared in Spys4Darwin, Inez gigged with Zakk Wylde’s Black Label Society during his downtime, and Cantrell worked on a second solo album. Degradation Trip, the guitarist’s sophomore record, appeared in June 2002, two months after Staley was found dead from a drug overdose at his Seattle condo.

Alice in Chains parted ways after Staley’s death, with Inez becoming a member of Heart and Cantrell collaborating with a number of hard rock and metal acts, including Heart and Ozzy Osbourne. Sony released Alice in Chains from their record contract in 2004, and the next year the group reunited to play a benefit concert for the South Asia tsunami disaster of 2004. Pat Lachman, the singer for Damageplan, acted as Staley’s replacement but other stars appeared with the band, too, including Ann Wilson and Maynard James Keenan. The one-off concert went well enough that Alice in Chains decided to make their reunion permanent. Hiring William DuVall, formerly of Comes with the Fall, as Staley’s replacement, Alice in Chains toured in 2006, which led to a tour supporting Velvet Revolver in 2007.

The revived Alice in Chains recorded a comeback album in 2008 with co-producer Nick Raskulinecz, which appeared in September 2009 as Black Gives Way to Blue. Debuting at five on the Billboard charts, Black Gives Way to Blue wound up going gold while racking up two Grammy nominations, reestablishing Alice in Chains as a force in mainstream and modern rock. The group toured into 2010 and then in 2011 set to work on another album with Raskulinecz. Entitled The Devil Put Dinosaurs Here, the album debuted at two upon its release in May 2013. Alice in Chains toured The Devil Put Dinosaurs Here into 2014, then spent the next two years on the road. In 2017, the group started work on another new album with Raskulinecz. Recorded primarily in Seattle, the resulting Rainier Fog appeared in August 2018. ~ Stephen Thomas Erlewine, Rovi

Netflix has shared the second season trailer for Marvel’s The Punisher. As you can see below, the trailer including Alice In Chains’ classic song “Would?”. 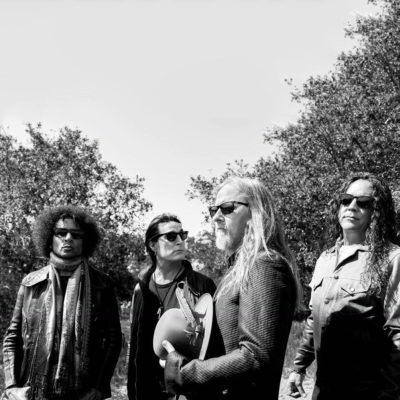