Terror is an L.A.-based hardcore band formed by East Coast transplant and vocalist Scott Vogel, formerly lead singer with Buffalo, New York bands like Despair, Sludgefest, and Buried Alive. Founded in April 2002 shortly after Vogel’s relocation, Terror issued a four-song demo that circulated among the underground scene before releasing a 7″ through Takeover Records. After a lot of touring, the guys — including guitarist Todd Jones (ex-Carry On), and First Blood members drummer Nick Jett (also of Carry On and Piece by Piece), bassist Carl Schwartz, and guitarist Doug Weber — signed with Bridge 9 and entered a Cleveland studio to record. The resulting nine-song EP, Lowest of the Low, was released in January 2003, and true to form, the band spent the rest of the year touring, including a stint in Europe with Biohazard. With Frank Novinec replacing Jones, Terror signed with Trustkill Records, and issued two albums of metallic hardcore through the label: 2004’s One with the Underdogs and 2006’s Always the Hard Way. Schwartz had left the band before Christmas 2005 to concentrate fully on First Blood and he was replaced on bass by Jonathan Buske; Novinec left as well, in his case to join Hatebreed, and Martin Stewart (ex-Donnybrook!) was soon welcomed on second guitar.

In 2008, Terror dropped a studio album, The Damned, The Shamed, as well as an archival live set, CBGB OMFUG Masters: Live 6/10/04 The Bowery Collection. By this point, the Terror lineup shifted again, with bassist Jonathan Buske replacing Carl Schwartz in 2006. In 2010, the band dropped Keepers of the Faith, which was the first album to feature guitarist Jordan Posner (who’d replaced Doug Weber) and bassist David Wood (who took over for Jonathan Buske). This gave the group a stable lineup that would last through three studio albums (2013’s Live by the Code, 2015’s The 25th Hour, and 2018’s Total Retaliation), two EPs (2012’s Hard Lessons/Only the Devil Knows and 2017’s The Walls Will Fall), and another live album (2010’s No Regrets, No Shame), as well as extensive touring 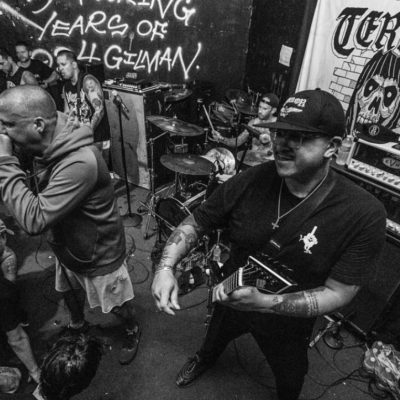