Offering a complex form of metal that combined the sweeping adventurism of math rock, the oddball tempos of experimental jazz, and the stunning brutality of thrash metal, Meshuggah raised the bar for metal bands everywhere upon their debut. The roots of Swedish metal band Meshuggah were planted in 1985; originally named Metallien, the founding lineup included frontman Roger Olofsson, guitarists Peder Gustafsson and Fredrik Thordendal, bassist Janne Wiklund, and drummer Örjan Lundmark. After a few demos made the rounds, Metallien broke up and Thordendal continued the band with a different lineup and a different name. The original lineup of Meshuggah also included vocalist Jens Kidman, guitarist Johan Sjögren, bassist Jörgen Lindmark, and drummer Per Sjögren. A handful of demos followed before Kidman left the group to form a new outfit Calipash, with guitarist Torbjörn Granström, bassist Peter Nordin, and drummer Niclas Lundgren; the surviving members of Meshuggah soon disbanded, and when Granström left Calipash, Thordendal assumed guitar duties in the new band.

Kidman and Thordendal then agreed to reclaim the Meshuggah name, and in 1989, the band released a three-song mini-LP. After signing to Nuclear Blast (and swapping Lundgren for new drummer Tomas Haake), they issued the full-length Contradictions Collapse in 1991. Second guitarist Mårten Hagström was recruited for 1993’s None EP, followed two years later by Selfcaged; in the interim, however, the group was forced to maintain a low profile — first Thordendal severed a finger in a carpentry accident, then Haake injured his hand in a mysterious grinder mishap. Destroy Erase Improve appeared later in 1995, and won over critics with its heady tempos and abstract approach. In 1997, Meshuggah returned with The True Human Design EP; that same year, Thordendal’s side project, Special Defects, released their LP Sol Niger Within. Meshuggah reunited for 1998’s Chaosphere, a thunderous album that was unbearably dense in its songwriting and scope. Several successful tours followed, and their incredible abilities were starting to be recognized by mainstream music magazines, especially those dedicated to particular instruments.

Once they left the touring circuit, Meshuggah were surprisingly quiet, cooking up new material for a few years while a rarities disc marked the time. But in the summer of 2002, they released Nothing, a masterpiece of atmosphere that added psychedelic touches to their ever-tightening sound. Unique in almost every way, the album didn’t make much of a mainstream impact but had metal fans banging their heads to 7/4 tempos and esoteric lyrics. A good word from Ozzy Osbourne’s son Jack scored them a spot on the annual Ozzfest tour, where they flourished on the second stage, often stealing the show with their original and savage math metal. After a brief break, Meshuggah released the I EP in 2004. Composed of a single epic track, the complex arrangements of I were just a hint of what was to follow. Their next album, Catch Thirty-Three, was released the following year and proved to be their most ambitious to date. A remastered re-release of Nothing with a bonus DVD arrived in 2006. The same year, Meshuggah returned to the studio to record the album that would become obZen, their sixth, which was released in March of 2008 in advance of a world tour that began in the United States with the band in the opening slot for Ministry’s final jaunt before moving to Europe, Asia, and Australia as a headliner. Their seventh album, Koloss, was issued in 2012 followed by the single and video for “I Am Colossus” and “Pitch Black” b/w “Dancers to a Discordant System (Live),” the following year. The Ophidian Trek, live audio and video packages were released in 2014. In the summer of 2016, the band and Nuclear Blast released 25 Years of Musical Deviance, an anniversary vinyl boxed set limited to 1,000 copies. It was a precursor to the band’s new studio offering, The Violent Sleep of Reason, in the fall. 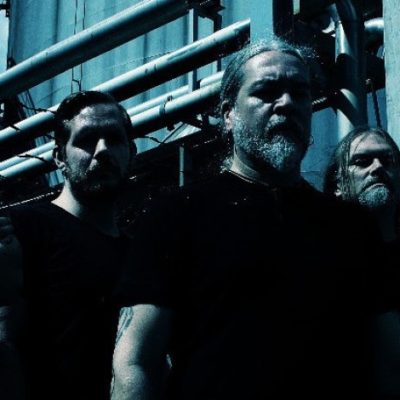