Chef by day, metal head by night, Chef Chris Santos is the owner and Executive Chef of three wildly popular restaurants located on the lower east side in New York City,”Vandal New York,” “The Stanton Social”, and “Beauty and Essex”. These restaurants continue to raise the bar on the perfect social dining experience in New York City and have solidified his well earned reputation as a trend setting chef.

He is also internationally known for his appearances on the very popular Food Network series “Chopped”, The Rachel Ray show, The Today show and The CBS early show, in addition to other television appearances. He has also appeared in the movie “Hitch”, and worked as a consultant on several other films.

He can be heard from time to time on Martha Stewart radio, and he has regularly been written about in a wide variety of outlets including the New York times, People magazine, and many others, but most of the time at most SLAYER shows and many rock and metal festivals through-out the United States 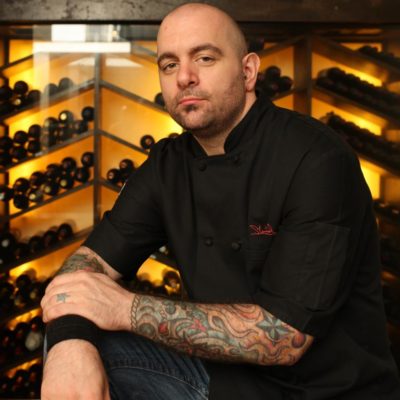